Review: Secret of the Caves 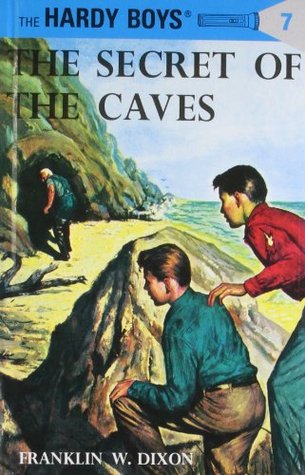 The Secret of the Caves is the seventh Hardy boys book. This is part of an occasional revisit where I'll be going back and looking at these to see how they stack up today. The Hardy boys and their friend Chet Morton are discussing Chet's metal detector when their dad, a famous private investigator, tells them he is working on a new case. A radar station is being built nearby and there are concerns about sabotage, as there have been unexplained accidents at the site. The boys are only too eager to help when another mystery presents itself- a young woman arrives and asks for their father's help finding her missing brother. It turns out her brother, Morgan Todd, is a college professor who studied abroad and suffered a head injury- his sister suspects he has lost hie memory and wandered off. Mr. Hardy agrees to help, and it is decided that the boys will begin investigating the disappearance while Mr. Hardy works on the radar situation. He leads the boys over to the site and while they are there an intruder is spotted, but they are not able to catch him.

The boys then travel to the college where Morgan Todd taught, and find a clue that leads them to Rockaway, a town not far from where they live. Rockaway is also where the Honeycomb Caves are- fancy that! The caves are where their friends Chet and Biff were going to camp and explore with the metal detector. After being jumped by some frat guys in what is apparently a hazing incident gone wrong, the bous head to Rockaway and do some nosing around. Joined by Chet and Biff, they camp in one of the caves and promptly get into trouble. Someone steals their supplies, and Biff gets injured- and they also meet a suspicious old man who lives in a cave. He appears to be harmless, but maybe not. Later the boys are nearly killed when someone plants a bomb and Chet is injured. The boys uncover a connection between the caves and a restaurant/ antique store in Rockaway, and decide it is time to pay a return visit to the Honeycomb Caves.

Someone clearly anticipates they may do so however, as there continue to be threats against them. After their boathouse is set on fire, the boys travel to the caves, where they are startled by a searchlight coming from the old man's cave. They spy men moving boxes into the cave, and that night see a submarine off shore. They then swim out to sub (seriously?) and after men come ashore they investigate the cave themselves. Pretty foolhardy, and it gets a little tense at the end until Mr. Hardy and the state police show up. Turns out a foreign country was sabotaging the radar tower, and Morgan Todd was their prisoner. Wht would a foreign country be so concerned about a coastal radar station? Alas we never find out.

This was a good read, in spite of the unrealistic elements. I enjoyed the wholesome nature of it, and it's clean storytelling for kids. There are some eye rolling moments, naturally, such as when Mr. Hardy lets the boys, even encourages them, to continue their sleuthing in spite of the danger- even after their car is blown up! Also they camp out in a cave that shows signs of being occupied, but they go to sleep? And Frank and Joe are teenagers but the police chief gives them info, as does a college dean. Overlooking all that, I enjoyed this and it was a quick, easy read. I will continue revisiting these and I think it will be fun to do so.
Posted by Greg at 8:52 AM