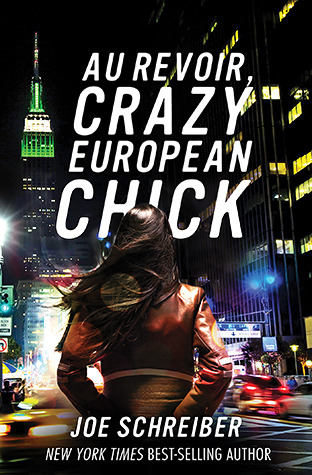 Au Revoir, Crazy European Chick is a fast- paced, rollicking thrill ride through the streets of Manhattan with a high school senior and his prom date- a lethal assassin with an agenda of her own. Perry is forced by his mother to take their Lithuanian exchange student to the prom, as a sendoff before she goes back home. Perry just wants to go to New York City and play with his band- they have a gig in the city for the first time. Perry plans to skip out of prom early and make the gig- but little does he know that Gobi, the exchange student, has a plan as well. A plan that involves getting to NYC and carrying out five assassinations!

Perry and Gobi head for the prom, and Perry soon finds that there is a lot more to Gobi than meets the eye- and that there is a reason she came to live with his family. Car chases, gunfights and all manner of havoc ensue, and before long Perry and Gobi find themselves in for the night of their lives.  The story starts out pretty realistic, which I liked, but as it progresses things get a little implausible. I mean there's only so much shooting at cops, fights with gangsters and assassinations you can pull off in a few short hours in Manhattan before you start thinking yeah right- but it's fun throughout and the snappy patter between Perry and Gobi works for the most part.

The blurb for the book says it's a John Hughes movie meets La Femme Nikita, and I can see that a bit. The pace is brisk and the repartee between Perry and Gobi is fun. One thing that irritated me was the passage of time in this story- for example we're told that it's 3 am at one point and they're at one location, then we're told it's 3 am at another location, but it takes fifty minutes to get across town between those two point. So there's a fast and loose quality going on there. This is a minor quibble I suppose, it's better to just go with the flow and enjoy the ride, which I did for the most part. This is a fun book - a little over the top at times, and not always very realistic, but a thril ride nevertheless and I had a lot of fun with it. The book has a great ending, and I'll be checking out the sequel Perry's Killer Playlist.

One other thing- if you take the dust jacket off, the book cover (front and back) is a map of Manhattan including Central Park. Kinda cool.

"Hold up," Chow said, dropping the hip-hop affection entirely. "We are talking about the same foreign exchange student here? The one that kicked those guys' asses at the prom?"
"Wait," I said, "what?"
"You didn't hear about that? Shep and Dean? That's what I was going to tell you. After Whittaker punched you, she came back and finished it. She put them both in the ER, dude. Ambulance ride on prom night. Where were you?"