Review: The Crab with the Golden Claws 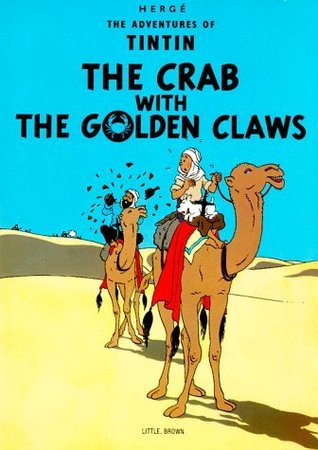 The Crab with the Golden Claws is a relatively early entry in the Tintin series. Tintin, our intrepid reporter, gets pulled into an opium smuggling caper and makes the acquaintance of Captain Haddock, the tipsy companion who becomes a mainstay of the series in later volumes. There is the usual amount of slapstick comedy and outrageous coincidences, and the bumbling detectives Thomson and Thompson make an appearance as well, complicating things as usual.

Tintin runs into the smuggling ring quite by accident- he happens to come across a label from a crab tin that his dog Snowy finds in the trash. When a similar label turns up in the belongings of a man found dead at sea, Tintin makes a connection. His curiosity soon earns him the ire of the smugglers, and he finds himself imprisoned on a freighter. Escaping with Haddock, they soon find themselves adrift in a lifeboat, stranded in the desert and matching wits with smugglers in a Moroccan port.

The action is fast and furious with lots of narrow escapes. It's breezy fun, but the story is a little less sophisticated than some of the later installments, and even the art seems less polished. Part of the problem could be that I recently read Tintin in and The Castafiore Emerald- both are later entries in the series and quite good, so this one may have just suffered by comparison.

The other issue I have is Captain Haddock. This is his first appearance, and while he is portrayed in later volumes as a lovable oaf, here he was just downright unlikeable. He’s always been known for his fondness for drink, but here is a drunkard and a buffoon. He even attacks Tintin on several occasions! Not the most reliable ally.

Still, this is worth a read if you like the Tintin series, or just want a graphic novel that is suitable for both adults and children. I would not recommend this as the place to start though. While these can all be read as standalones, some are better entry points than others, and I think this one is of average quality in the series as a whole.